New England weather - where else can you have a whole season's worth of weather in just one week?  After the snow on Sunday night, there were a couple of days of cold, windy weather that were very much like the depth of winter.  Most of the animals around Lake Wicwas were hiding safely in their home; the only signs of life for a couple of days after the snow were a few mouse tracks, one set of porcupine tracks, and a couple of fox tracks.

But then the weather warmed up, and the activity increased greatly.  On an early morning ski I found some some perfect fox tracks going right across the middle of the lake. Each toe pad was imprinted, as well as even the toenails.  This pattern clearly shows the different size of the front (larger, on the left) and rear (smaller) paw.


The low, early morning sun provided good contrast for animal tracks, as well as the patterns made in the snow by the wind, and reflections off the ice where the snow was blown away. 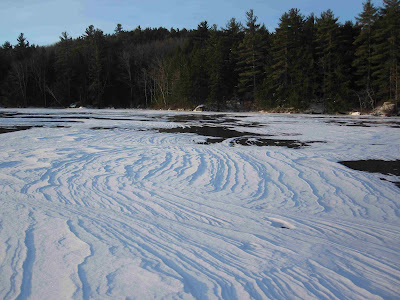 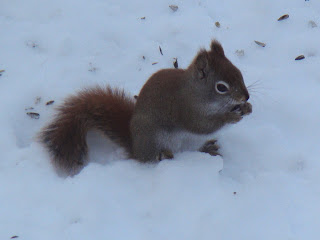 The warm weather also brought out lots of deer activity, with many sets of tracks along the usual deer paths.  By Friday and Saturday it felt like spring with temperatures up into the 40s, warm sunshine, and the chickadees singing like it was late March.  The squirrels were very active, running up and down the trees and all over the ground collecting food in the warmer weather.  I sometimes think they they're in cahoots with the birds when I watch the nuthatches shoveling seeds from the feeder to the ground!

Temperatures today were bit cooler, but with a warm front bringing more humidity, and with the lake still cold, fog formed right on the surface so thick we couldn't see across the cove.
Posted by Scott Powell at 6:47 PM