My brother Glen, who lives in Canterbury, sent me a great video of a porcupine this week, just plodding happily through the snow without a worry in the world (click here to watch it).  With that level of self-protection, there isn't much a porcupine has to worry about.  Sure, the occasion fisher - if it's really hungry - will go after a porcupine, but other than that they're pretty much untouchable.  Many a dog will try, but invariably ends with nothing but a muzzle full of quills.

Glen sees this guy quite often, saying that he comes out to help him when he's working on the wood pile.  So he's named him Pete.  Sometimes he finds Pete lounging on the walkway where the stone has absorbed the heat of the sun.


Other times he's curled up, napping beside the foundation, enjoying the extra warmth emanating from the ground and the house.

Or perhaps he's just hanging around, lapping up some snow-melt from a sunny, southern-exposure snow field.

He reminded me that I hadn't been out to Porcupine Ridge this winter to check on our local porcupines, so I took a snowshoe out to see if they're still around.  It was right after a fresh snowfall, so I knew any tracks would have occured just the night before.  (That's the tradeoff with new snow - you know tracks are very recent, but there also aren't many because they've all been obliterated.)  Sure enough, I found plenty of tracks just from last night leading into (or out of) various little caves and crevices among the boulder field on the ledge.

I enjoy finding these little porky hideouts, but I always make plenty of noise as I approach.  The only time I've had a close encounter with a porcupine was on a winter hike in Homestead Forest in Ashland, and I wasn't even looking for animals.  I was just walking along the trail, approaching Devil's Den, when out one popped from under a rock right beside the trail.

He was as startled as I was, but he just turned around slowly and went back to his hideout.  If you haven't been there, Homestead Forest is a really neat area (owned and protected by the Lakes Region Conservation Trust) with 3.5 miles of trails, old homesteads, nice views, and Devil's Den - a giant boulder field. 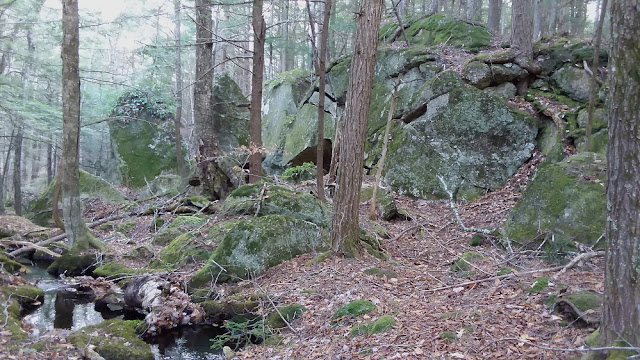 You can find directions, a trail map, and pictures by clicking here.  But if you go, watch out for Pete's nephew! 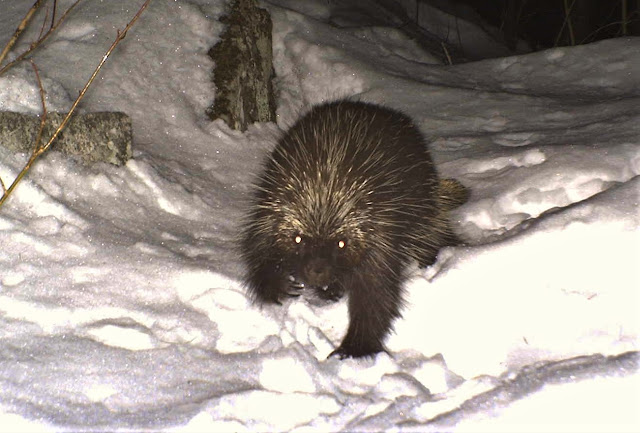 Thanks for sharing Glen!
Posted by Scott Powell at 12:00 PM